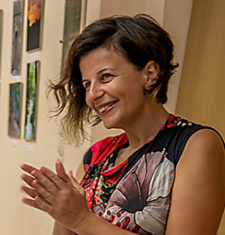 Photini Papahatzi born in Athens, Greece is a cultural manager and an artist.  Photini holds a Master in Arts Management from City University of London (2001) and a degree on European Civilization from the Open University (2016). She studied fashion design, computer graphics, photography, video editing and documentary filmmaking.
Photini is the coordinator of European and educational programs of Entefxis-Photometria Festival, Ioannina since 2013. She worked on the development and implementation of EU projects for the NGO CulturePolis in the last 8years. She is a photography tutor for Photography Lifelong Learning courses since 2008 and for local photography groups. She has worked with Amaka for ArtEmergency photography workshops in the refugee camp in Filippiada, Epirus, Greece.
She has organised and participated in photography exhibitions in NY, Cuba, UK, Germany, Greece,FYROM, Russia and Kroatia. Her works are held in private collections in Greece and abroad. Photini worked in Kinetika (www.kinetika.co.uk) on project development, video documentation and creation, press & marketing (2002-2004).
Selected projects:
2015-6 ‘Home’ collaboration project between Nazlı Deniz Oğuz (Ka Atelier) and Photini Papahatzi (Entefixis-Photometria Festival) in the framework of TANDEM Cultural Managers Exchange Turkey ,an initiative of the European Cultural Foundation (Amsterdam), MitOst (Berlin), Anadolu Kultur (Istanbul), supported by Stiftung Mercator (Essen).
2014 Participated as an artist in the project ‘Lhi-Lna- Living Historiy-Living Nature’ under the framework of the “Greece – FYROM IPA Cross-Border Programme 2007-2013”, an intensive programme of artistic creation for the enhancement of the local historic and natural heritage of the two border Municipalities involved, the Municipality of Novaci and the Municipality of Almopia.
2013 Project management for “Frames of European Common Life” Grundtvig Partnership of the Longlife Learning Programme of the European Union. Her responsibilities as a coordinator consisted: in composing a syllabus for the workshops shared by all partners of the project, organising the workshops in Ioannina and in nearby cities and the exhibition of the participants.
2011-2013 Photini worked as project manager for SUSTCULT project “Achieving sustainability through an integrated approach to the management of cultural heritage.” The project was co-financed by the EU – Transnational Cooperation Programme South East Europe (South East Europe – SEE) and the Greek state. www.sustcult.eu
2008-2016 Photini has worked as a photography tutor for Lifelong learning Photography classes with various groups.
2008- ‘Anthropos- Art -Environment” Youth in Action programs supported by the European Commission, the Institute for Youth, the prefecture of Preveza. The program consisted of workshops of artistic expression and reflection in relation to the environment and intercultural dialogue in four municipalities.
www.photinipapahatzi.com